Jo-Int (pronounced i'oo'int), a Swede musician, spent most of his formative years in Germany. His real name is Joakim Intagen. His mother is from Berlin and hence he speaks German tolerably well.

In 2008 Jo-Int achieved moderate success in Sweden with his album ‘Känt’, which he recorded exclusively on vinyl. He toured the independent clubs of Stockholm, Gothenburg, and Malmö with this album.

He hardly hears new music. When asked about it, Jo-Int replied, "There are only a few songs that I rate as really good. I write songs because I can tinker with my own creation until I get to like them. If others like them that's fine; if not, then that's fine too."

He is an exceptional musician with quite a few quirks. Since he was once attacked and robbed on the street, Jo-Int wears the inner pockets of his trousers outwards to indicate that he carries nothing with him. He feels most comfortable in the dark and hardly ever leaves the house during daytime. He feels safe behind his red glasses, and they have become his trademark. Other people find him shy and unapproachable. He simply does not answer a question if he does not like it. He claims to be 1,026 years old as he has been reincarnated several times.

However, Jo-Int is a nice guy who wants to do only one thing: music. And he makes damn good music. 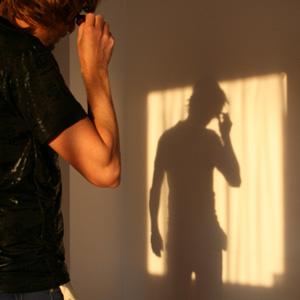